A Tsunami called COVID-19 and Strategic Planning on Law Firms. 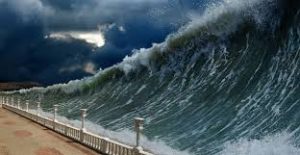 We were all hit by an unexpected and absolutely unpredictable tsunami for most people and governments, except for the genius Bill Gates who detailed it precisely in a “TED talk” in 2015. Impressive! As always, I use metaphorical comparisons in my discussions, as I think it makes (for me) the expression of my thoughts easier and this time, as already said, I will use the figure of the tsunami.

In the first phase, there is an abnormal retreat of the waters on the beaches, arousing curiosity and people in general do not realize what is happening and that was what happened earlier this year when we started to hear what was happening in Wuhan and we had no idea what was coming.

In the second phase, the first wave appears, which causes the unexpected impact by destroying everything it finds on the coastline, forcing people to seek shelter anyway, but it is still not the most lethal. In my point of view, it is at this stage that we entered a few days / weeks ago (depending on the country), when the governors realized the size of the “beating” and decreed social withdrawal or isolation (again depending on each governor), because it is the only known way to defend itself. Climbing anywhere high or, in our case, isolating yourself at home is the only way to escape, in the absence of all other options (vaccines, drugs, treatment, etc.).

The third phase, which is the most critical, is represented by the second wave, which is usually larger than the first and when it reaches the land it finds a path already opened by it. It usually invades areas considered hitherto safe and is also much more durable and destructive, because it brings with it debris and functions as a large-scale war tank going over everything in front of it. I believe that this phase is the one we are experiencing at the moment (and we are not sure how long it will last) when companies and people are stopped, without their sources of subsistence and are trying in every way to guarantee their livelihood. The only attempt to stay “alive” economically speaking is to adopt a survival tactic and try anyway to use the tools we have to keep us up: online sales, negotiating arrears, anticipating receivables, promotions, cost cuts unnecessary, remote work (for those who can) and everything in reach to try to reach the end, when the relaxation of social restraint measures begins.

The fourth phase is represented by the total retreat of the waters with the exposure of the damage caused, when all those who survived try to return to their places to check what is left and how the reconstruction work will be. In the economic case, it is the recession that will arise after all this is over and how we will reinvent ourselves to survive in a totally different world and how we will rebuild our lives and our businesses. Now, more than ever, we must take advantage of the time we were forced to think, rethink our activities in a way never before imagined and plan our activities and strategic planning tools are the only tools we have to help us. Techniques such as: SWOT analysis; OKR Method (Objectives and Key Results) by Peter Drucker; Analyze 360; Porter’s 5 forces are some of them.

I have some suggestions (see, they are suggestions), but each company must find the right tool for its activity:

The first is: Use more than one tool and combine the best part of each. The combination of SWOT Analysis with the OKR method has resulted in my experience.

The second is: Get off the paper! Define at the end of the analysis which will be the “projects” to be developed to achieve the proposed goals and objectives. Also define those responsible for each of the projects and oblige them to present to the other partners (or any other decision-making body) a “business plan” containing premises, objectives, schedules, necessary resources and expected results for their approval. It is essential to have the so-called “accountability” for each project! Hiring an experienced professional in the development and implementation of these tools can help enormously in this very difficult moment that we are going through and we are going to go through!